Lago di Braies (Lake Braies): Tips for Visiting the Emerald of the Dolomites

The spectacular Lake Braies in northern Italy (“Lago di Braies” in Italian and “Pragser Wildsee” in German), is a famous alpine lake in the Dolomites so green it’s known as the Emerald of the Dolomites.

If you’ve been thinking about visiting northern Italy or doing one of our Italy road trips to explore the craggy mountain range of the Dolomites, you’ll definitely want to include a visit to Lago di Braies on your itinerary.

Enchanting Lake Braies is one of the most visited spots in South Tyrol and should definitely be on your bucket list for Italy. We’ve been to many other parts of Italy but this was our first venture into South Tyrol. This region of Italy has been popular with skiers and alpine-sport enthusiasts for decades. In fact, the Biathlon World Cup (the dual Olympic sport of cross-country skiing and rifle-shooting) is held annually in the nearby Antholz Valley.

Northern Italy at times feels a world away. Though you’re in Italy, German is widely spoken, and overall the culture of South Tyrol is much more German than Italian. Locals even refer to themselves as German-speaking Italians.

This is why, everything here has 3-4 different names. Case in point with Lago di Braies, Italy — Lake Braies (in English), Pragser Wildsee (in German) and even that sometimes gets referred to as Lake Prags (in English).

It’s a unique culture in this part of Italy known as South Tyrol.

Where is Lake Braies in Italy?

Lake Braies is in the heart of the Braies Valley in the Dolomites, a UNESCO World Heritage Site in northeastern Italy in the lower Italian Alps. The Dolomites are north of Venice and the Veneto region and can even be reached in a day trip from Venice.

At an elevation of 4901 feet (1494 meters) this 77-acre lake is a protected national monument and makes for a wonderful half-day trip while traveling through the Prags Dolomites.

Lago di Braies is also not far from Austria. In fact, our recent visit was part of our road trip from Südsteiermark, Austria into Slovenia and Triglav National Park, then into this part of northern Italy. So if you want to see more of these two countries, it’s a very doable drive and excellent European road trip. 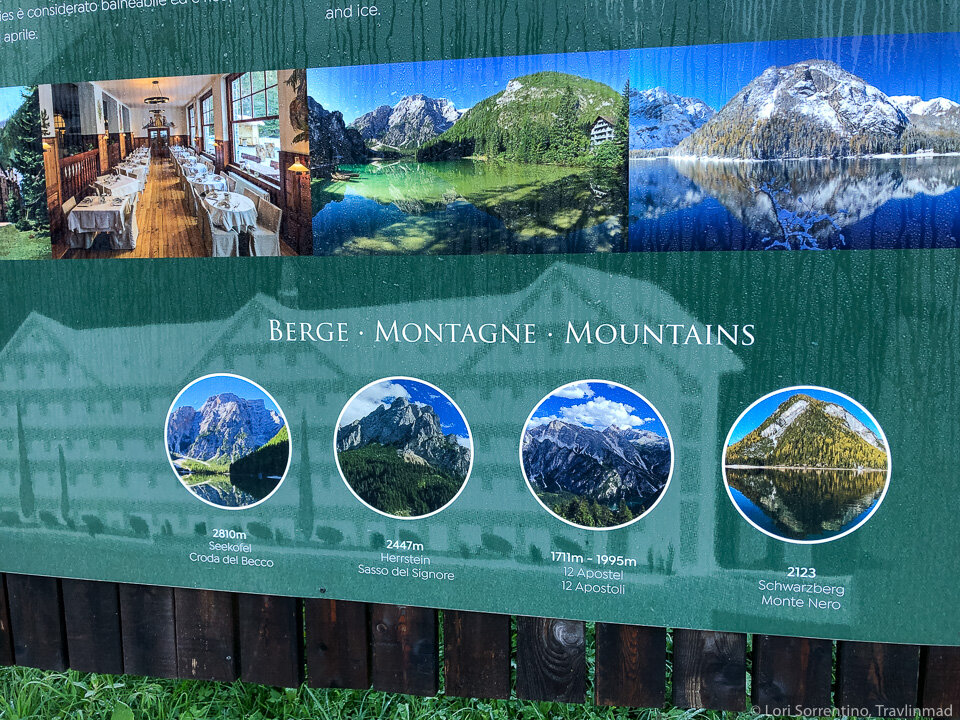 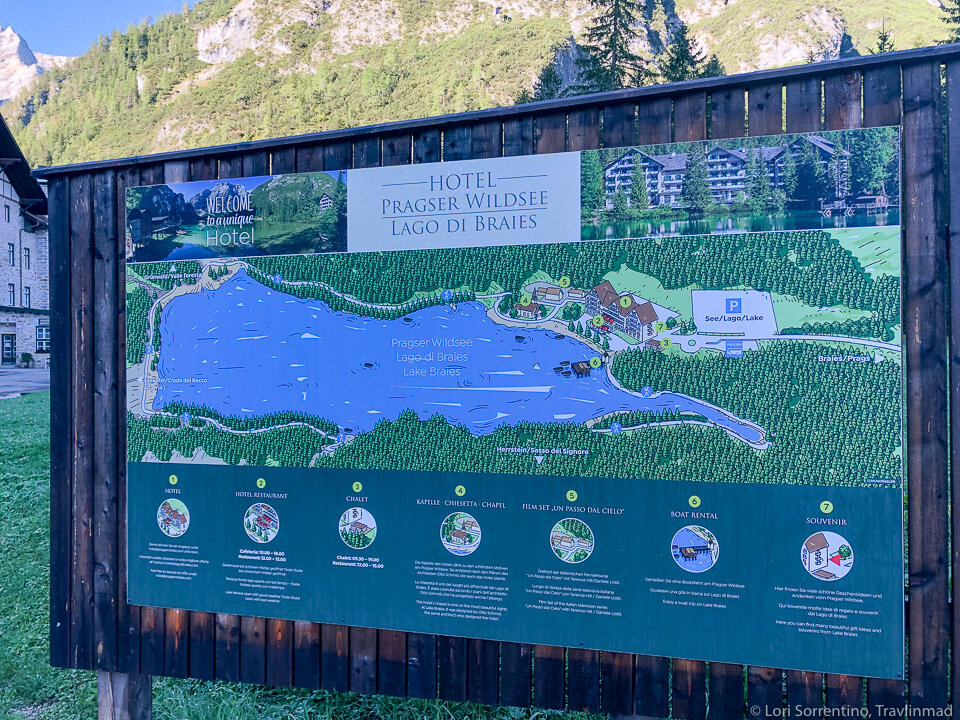 Lago di Braies is a great place to visit year round with each season creating a unique feeling. But for most visitors, the summer months are an ideal time to visit, though it can get very crowded. We recommend visiting Lago di Braies in the shoulder season of mid-September to early-October.

We visited in early September, and the temperature was perfect — neither too hot for hiking nor too cold to just hang-out admiring the beauty. There were still lots of visitors though, but not the crushing crowds you’d find in the summer time. The lake is open year round though hiking may get a bit dicey in the winter months of December, January, February, and March as the snow and ice will impact how far off the path you can get.

While this beautiful lake may no longer be a hidden gem like some other places in Italy and the Dolomites — it’s definitely worth a visit!

Getting to Lago di Braies, Italy

For the best way to get to Lago di Braies we highly recommend renting a car. This will free you from the schedules of public transportation and give you more time to explore.

We were staying in the Anholtz Valley (Valle Anterselva), so we were already exploring the area by car. The roads are excellent and well-marked. A GPS, either in your rental car or on your phone makes getting around even simpler, and you’ll be rewarded by the incredible scenery as you drive through the mountains.

There is a parking lot just next to the hotel that costs 8 Euros per day. At certain times of the day and year parking at the lake can be a a bit of a hassle, but don’t let that stop you from driving. During the summer months when the parking area at the lake is full the authorities will close the road leading to the lake from 10am until 3pm. There’s overflow parking just 5 km (3 miles) from the lake and from there you can take the shuttle.

Train or Bus to Lake Braies

There is public transportation from June to September from several major locations to Lago di Braies via train or bus. These options may be a bit less expensive than a rental car, but driving will give you much more time to explore and take photos of the surrounding area on your own.

Things To Do At Lago Di Braies

By far the most popular activity at Lago di Braies is hiking the 4 km (2.5 miles) trail that follows the shoreline. The trail is fairly easy but there are stairs in a few places making the trail inaccessible to wheelchairs and strollers. The circuit takes 1.5 - 2 hours at a reasonable pace. Bring water and something to eat if you like, and definitely wear sturdy footwear. 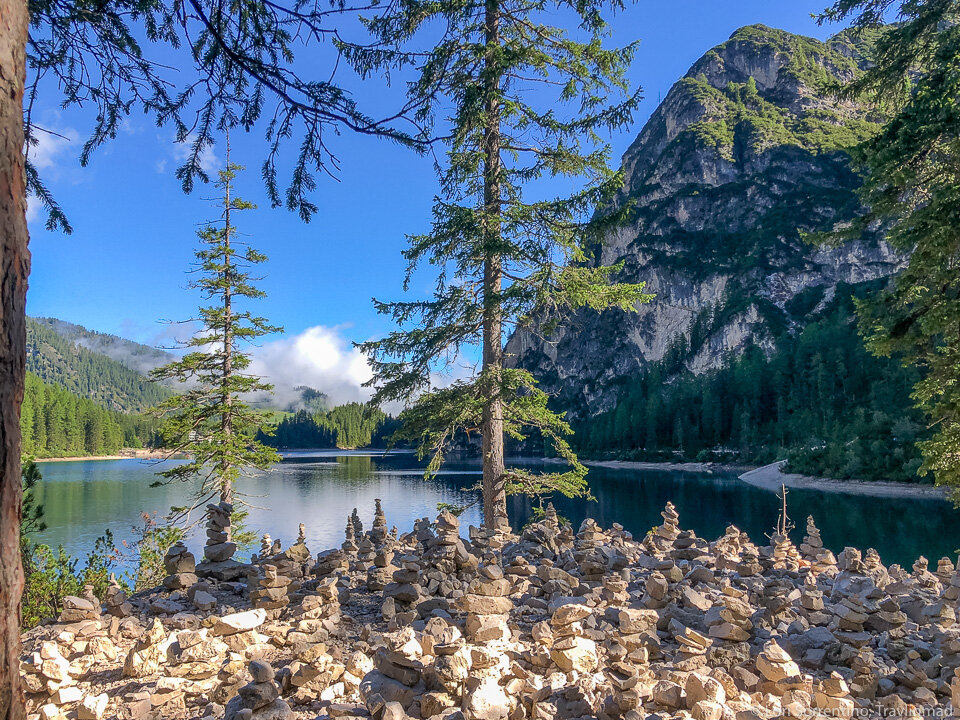 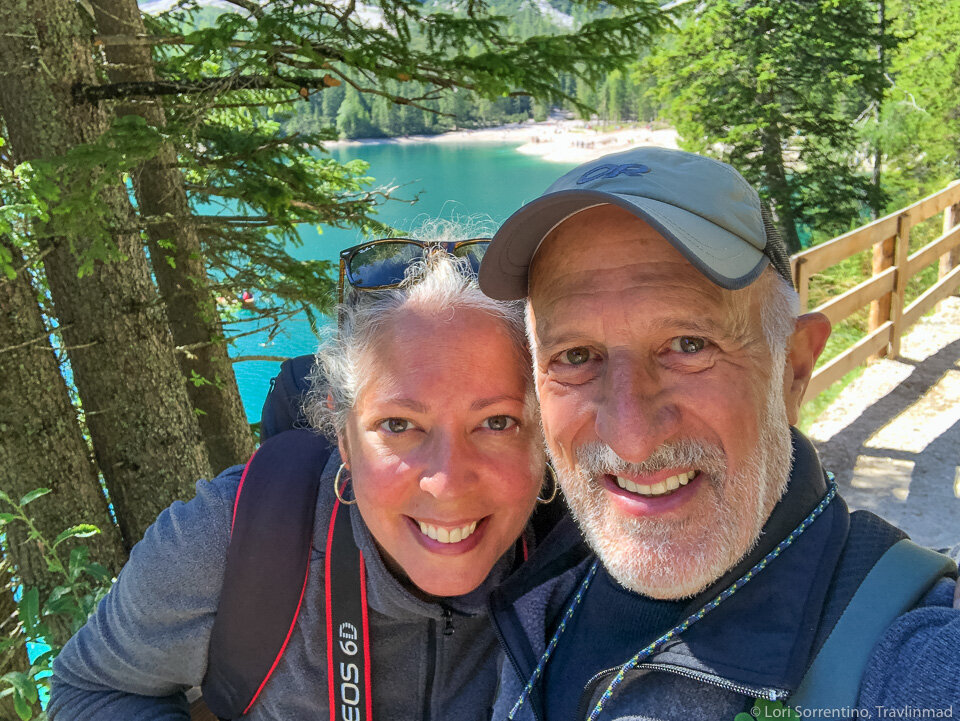 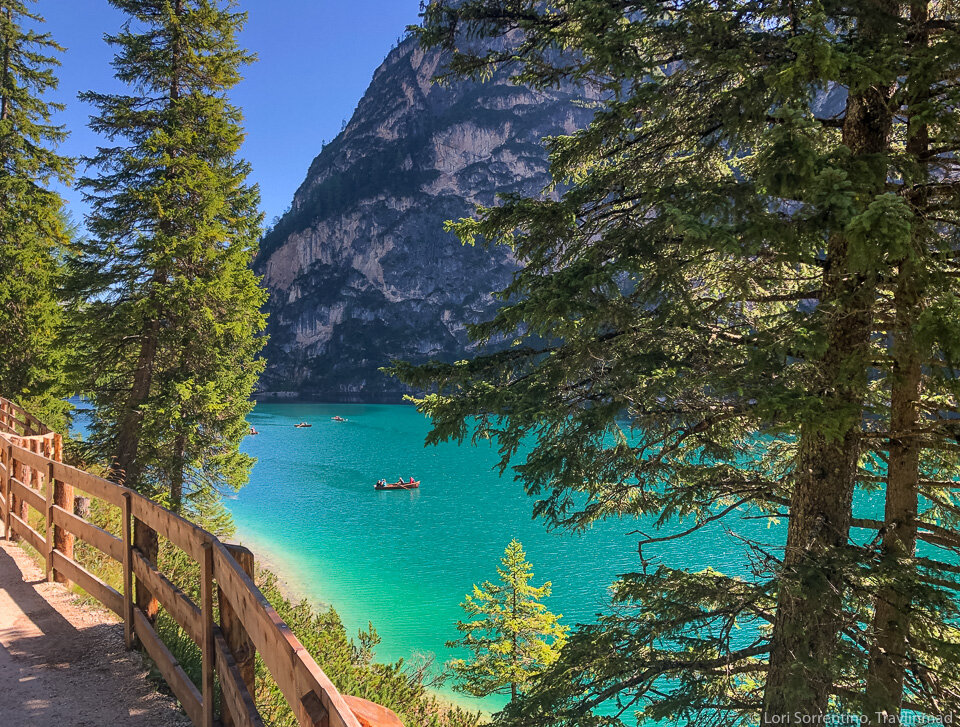 Rowing out onto the lake could well be the most anticipated activity at the lake. There is a limited number of boats out on the lake at any one time so get in the queue early. Its truly beautiful and the surrounding scenery takes on a whole new look from on the water. We even watched a newlywed couple in their wedding attire being photographed on a boat.

Boat rentals cost €25 for one hour, €15 for each half hour after, and are available from June to September.

Sip an Hugo Spritz at the Hotel Lago di Braies

You may be familiar with Italy’s most famous apertif, the Aperol Spritz. It’s that neon orange cocktail everyone sips at Aperitivo — or at least in some parts of Italy. If you haven’t yet tried an Hugo Spritz (pronounced “OO-go”), then you’re in for a delicious — and local — treat. That’s right, locals in South Tyrol are much more apt to Spritz with the famous elderflower liqueur made in these northern Italy mountains.

So after a day of adventuring around the lake, stop in the Tiroler Stube cafeteria at the Hotel Lake Braies for a refreshing Hugo Spritz. You might just get as hooked on this local drink as we did! There’s a pretty terrace from which to enjoy it from 10 am to 6 pm. The hotel’s restaurant is also open for a meal daily from noon to 5 pm.

While we recommend arriving to Lago di Braies early in the day by 8:30 or 9:00am, it’s not until the afternoon that you’ll get the best and most colorful photographs.

To orient yourself, the entrance to the lake is located at the northern part of the lake, looking south. So the steep mountains to your left typically block most of the sun rising in the east until at least 11am or so. It’s that overhead sun that illuminates the green in the lake for those stunning pics and brings out the beauty of the lake and its surroundings.

With nearly 63,000 acres adjacent to Lake Braies, the Fanes-Senes-Braies Nature Park is a hikers and backpackers paradise with trails ranging from flat terrain to highly challenging and difficult. The lake itself has several trailheads which extend away from the lake into the Nature Park and far beyond to the region of Veneto further south.

If you’re looking for some new trails to explore the Dolomites landscape, the Nature Park offers lots of options, from compelling views of jagged peaks and slippery slopes to beautiful alpine pastures and highlands.

Yes, swimming is allowed from the beach. Jumping into the lake will surely qualify you for the polar bear club. Be forewarned, it is cooooold!

Near the end of the loop trail is the small Chapel Lago di Braies (Cappella Lago di Braies — Kapelle Pragser Wildsee) that’s worth a stop to read about the interesting WWII history of the lake. Built in 1904, the Chapel is a modest structure.

Near the end of World War II, 139 prominent prisoners from 17 European countries were held hostage by the SS in the Dachau National Socialist concentration camp and taken to the “Alpine Fortress” of South Tyrol. On April 30, 1945, the prisoners in Villabassa were liberated by the German Wehrmacht and brought to Lago di Braies by a Nazi SS commander to be bartered in exchange for the commander’s safety, or executed.

Fortunately for the prisoners, the hostage exchange with the Allies took place at the Hotel Lago di Braies (Hotel Pragser Wildsee) where the hotel owner Emma Heiss-Hellenstainer welcomed them and made it possible for them to “return to life”. Afterwards, the freed prisoners gave thanks at the chapel. 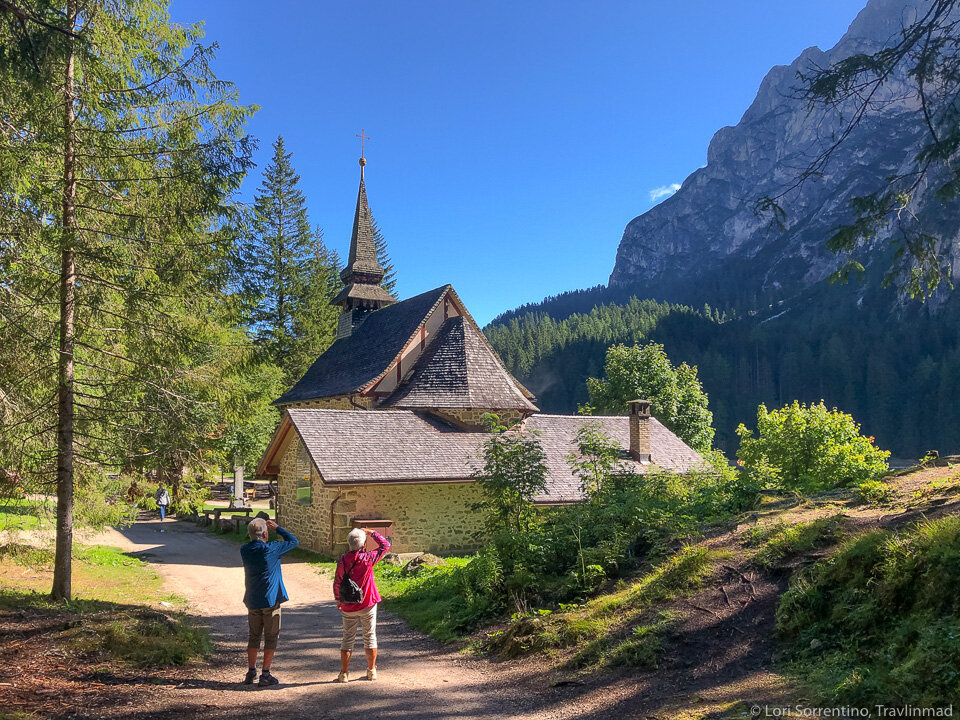 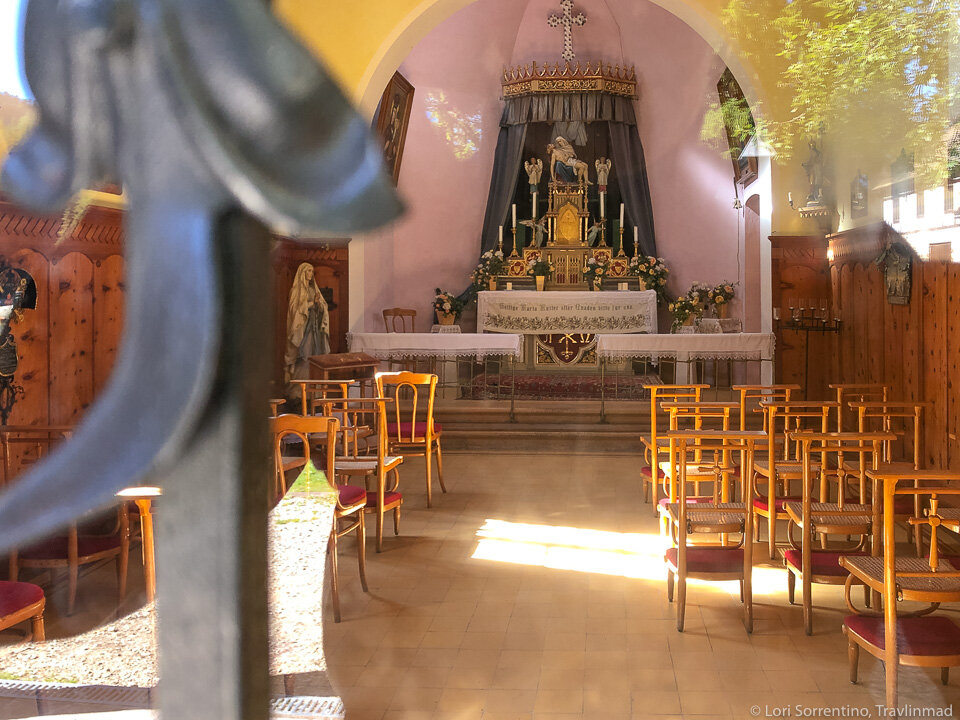 Inside the Chapel of Lake Braies (Cappella Lago di Braies)

If your way of exploring is on 4 legs atop a beautiful horse, you can rent horses at the nearby Steinwandterhof horse riding school and stable, or take a private tour. Talk about Instagrammable Lago di Braies!


Where to Eat Near Lake Braies

The Pragser Wildsee restaurant at Hotel Lago di Braies has the only restaurant/bar at the lake. If you plan to have lunch, a late meal, or just a coffee and a pastry, definitely reserve a table. The outdoor seating is comfortable, and if it’s chilly there’s warm and cozy seating in the dining room.

Inside or out, you’ll have unobstructed mesmerizing views out over the lake to Seekofel Mountain in the distance while you feast on South Tyrolean specialties.

At the beginning/end of the trail loop is a small snack bar where you can purchase something to drink and something light to eat. This is also where you’ll find the public restrooms.

This very good restaurant is only 6 minutes by car and within walking distance of Lake Braies, 2.8 km (1.74 miles). There’s inside/outside seating with great views while enjoying traditional local specialties. 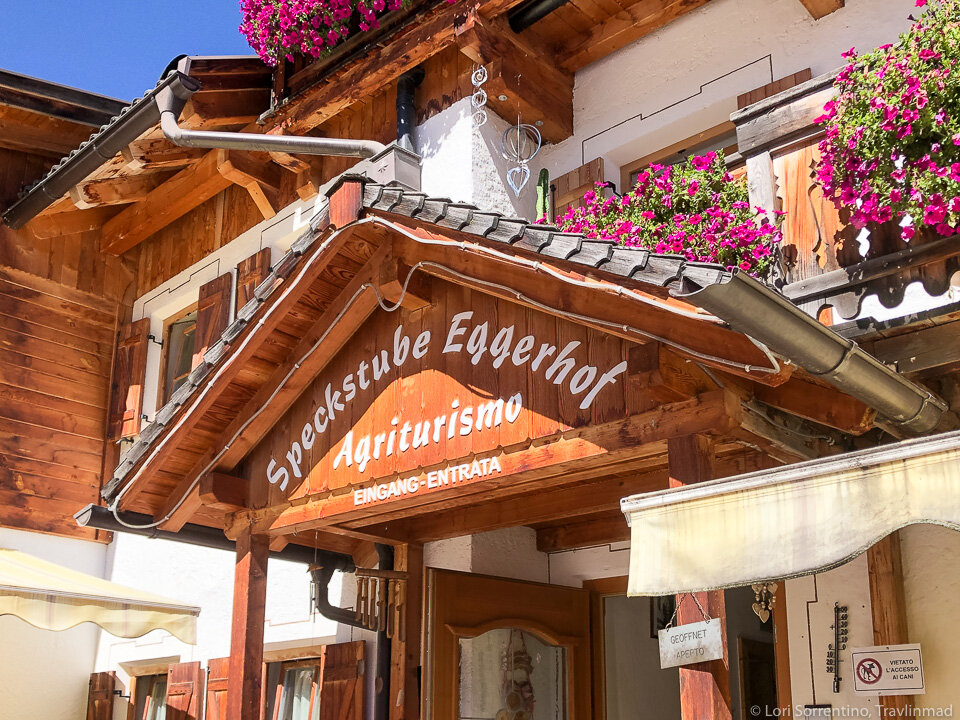 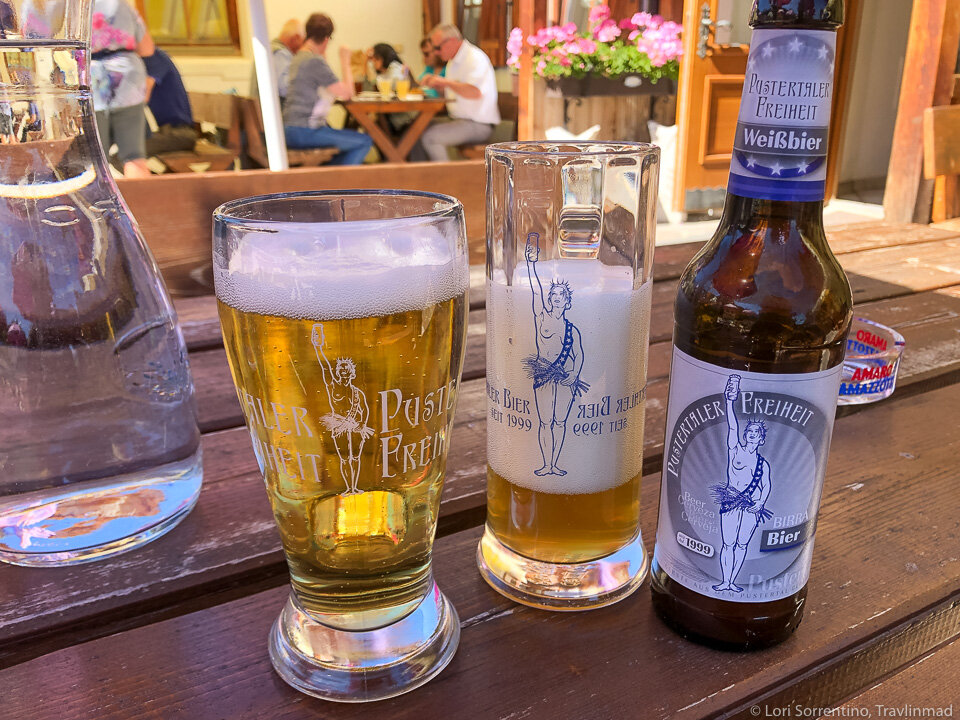 Where to Stay Near Lago di Braies

Surprisingly, though Lake Braies is a popular tourist destination, many visitors stay closer to the small ski towns north of the Dolomites to be near the ski action. If you’re looking for a more rural overnight stay like camping, Lago di Braies offers two options within driving distance to the lake.

This historic hotel is right on the lake and has a very good restaurant/bar. There’s a minimum stay of three nights, another good reason to rent a car. Checks rates and availability here!

Located 1.3 miles from Lago di Braies, this is a very nice farm stay and horse riding school with Alpine style accommodations and views of the Dolomites. This is also the place for arranging to horseback ride around the lake. Enjoy breakfast served buffet style, and horse back riding. Book your stay here.

This beautiful 4 star hotel with a restaurant/bar also features a wellness room with 4 spas, a panoramic pool, and sun terrace. To make a reservation click on this link.

Steinerhof has Alpine-style rooms with balconies, and bikes and parking are included. Breakfast is prepared daily, and the restaurant serves delicious South Tyrolean specialties for lunch and dinner. Choose your stay here.

No matter how you say it — Lago di Braies, Pragser Wildsee, Lake Braies, or Lake Prags — this stunning emerald lake in northern Italy is worth a visit!

Read More of our Italy Posts to Plan Your Trip:

Movie Inspiration: What Movies about Italy to Watch Before You Visit

Road Trip through the Bologna Appenines

Regional Foods of Italy to Try