Think of Italy and you immediately think of the food, am I right? Food is so much a part of Italy's culture, and each region's unique specialties are worthy of their own place on any foodie's Italian bucket list when you eat it at the source — whether it's pizza in Naples, pesto in Liguria, or seafood in Sicily.

And then there's the food in Bologna and Emilia Romagna, arguably the culinary capital of Italy.

What's so noteworthy about Bologna food?

Like the iconic luxury cars that also hail from this region in north central Italy, Bologna and Emilia Romagna are the Ferraris and Lamborghinis of Italian food so the first question to ask isn't what to do in Bologna, it's what to eat in Bologna!

You know it's true when even other Italians admit it. Yes, in Bologna, Italy, food is life. It defines the region.

So whether it's your first time to Bologna or you've already visited, be prepared to pace yourself so you don’t overdo it and flame out too quickly. Don’t make that rookie mistake. There are so many great foods to try in Bologna. They’re filling, but you can do it — remember, it’s a marathon, and only the strong survive.

Here are 10 Bologna foods that define Emilia Romagna, one of the most delicious regions of Italy.

This article may contain affiliate links. If you click through and make a purchase, we may earn a small commission, at no extra cost to you

Before we get to the dishes, let’s talk about the food itself.

Italy has its share of amazing food destinations. From north to south — dumplings and cheese with everything to fresh seafood and citrusy flavors — there’s no doubt that the food in Italy follows the sun, and sea. There are so many flavors and regional variations, it’s no wonder that Italy is a favorite country amongst foodies.

The food in Bologna and Emilia Romagna however is truly unique. Where you often think of Italy’s food as pasta (with red sauce) and hearty Tuscan wines, the cuisine of the Po Valley turns everything on its head with aged (and cured) foods and light wines.

Just as a hearty red is a perfect match for acidic, tomato-y pastas in warmer climes, the frizzante Pignoletto and Lambrusco and the fatty cured meats and dishes in Bologna are also a marriage made in heaven.

Just when you think you know Italian cuisine, the dishes you’ll find in Bologna turn it all upside down. Cheers to that — and these amazing must-try foods of Bologna!

Bologna may be known for its stuffed pastas, but it all started with the tiny tortellini and the slightly larger tortelloni, still handmade today by locals in local pasta shops, called sfogline. The giant oversized single tortellacci is also unique (see below) but you don’t feel the same fun, textural experience in your mouth as the smaller shapes. And let’s face it, why are some shapes of pasta more fun to eat than others? Because they feel better in your mouth. ;-)

You can cover up tortellini with yummy sauces or add them to chunky soups, but the traditional way to enjoy them in Bologna is in a simple broth or in brodo. Simplicity is a hallmark of Italian cooking, and never tasted so delicious as it does in this dish!

My tortellini in brodo at Trattoria Serghei was served with a fresh grate of parmigiano reggiano. It’s an authentic family-run restaurant north of the Piazza Maggiore serving amazing authentic local food.

Americans may think mortadella looks and tastes like the Oscar Meyer bologna they grew up eating as a kid. And they’d be half right. But any resemblance ends with your first bite. Fresh mortadella tastes porky and garlicky. It's delicious and completely unique to Bologna.

Build the perfect Bologna picnic basket one day by shopping for goodies like mortadella in the Quadrilatero, the oldest market in the city. Shops will let you sample before you buy, then make sure you get enough, It’ll be gone before you know it!

Take a day trip to Modena when you’re here and taste some of the most amazing flavors in the region. Better yet, take a food tour there and nosh your way through the city.

Modena may not produce the staggering number of prosciutto hams as their Parma neighbor, but I would argue that less quantity results in a higher quality and tastier ham.

Prosciutto is tender and porky, with just a touch of saltiness. It's perhaps the most well-known Bologna Italy food. Also try the fattier version known as Speck if you can — equally as tender and bursting with flavor.

The Italians take their DOP very seriously when it comes to food production, and well they should! The Designated Origin of Protection is what distinguishes these famous Bologna foods from anywhere else in the world.

Food in Bologna and elsewhere in Italy is heavily regulated by the Italian government to very high standards. Lucky for us! True Parmigiano reggiano doesn’t come in a can. It takes years to produce and age, and a second to devour.

They call him “The King of Cheese” and he has earned every bit of the reputation.

Will you take a look at that! That's 25 years in the making.

Authentic DOP balsamico di Modena is silky smooth and gets along well with just about anything in your pantry — from cheese, figs, and micro greens to pastry, pasta, or a scoop of vanilla gelato.

Want to taste test for yourself? Italian Days runs a killer food tour that combines this balsamic visit with some prosciutto and parmigiano reggiano cheese. It's truly one of the most fun things to do for foodies.

You know this namesake has to be one of the most famous food dishes in Bologna!

But please don’t let the term ‘meat sauce’ con you into thinking this is a simple dish just anyone can make. Homemade tagliatelle or pappardelle pasta in a classic Bolognese sauce is a deceptively simple and delicious dish.

That’s because authentic Bolognese takes time. It's one of the oh-so-classic dishes that defines Bologna, the capital of the Emilia Romagna region.

Pair it with any of the wines of Emilia Romagna and it's a match made in foodie heaven.

Bologna food is unique among Italian regional foods. They're known for stuffed pastas among other things, like this giant tortellini known as tortellacci (below). A single sheet of pasta is typically stuffed with spinach, meat, onions and garlic, and sauteed with butter, maybe a little white wine, and flavorings like rosemary and pancetta. Yum! 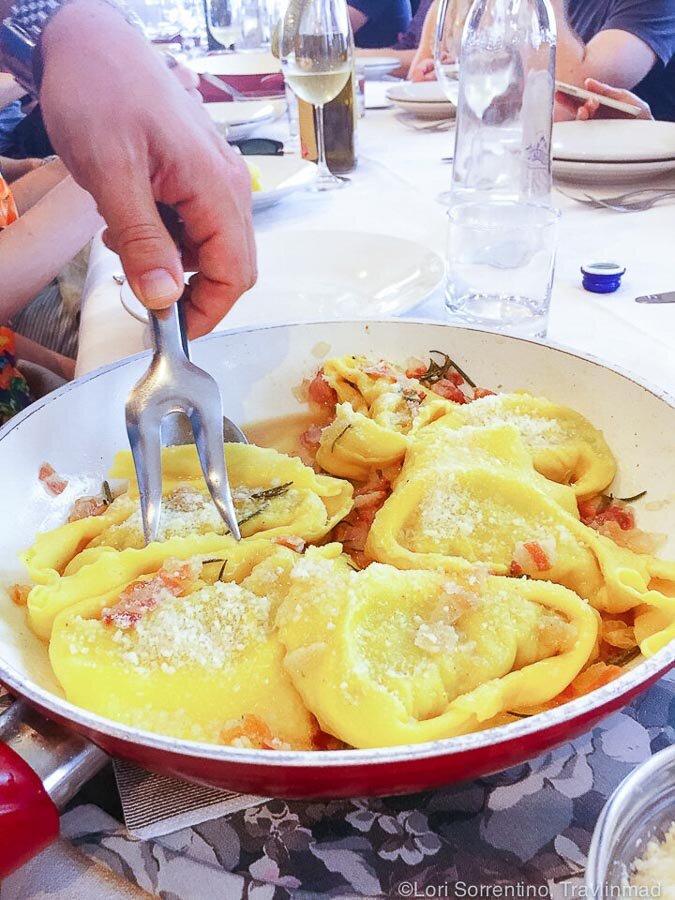 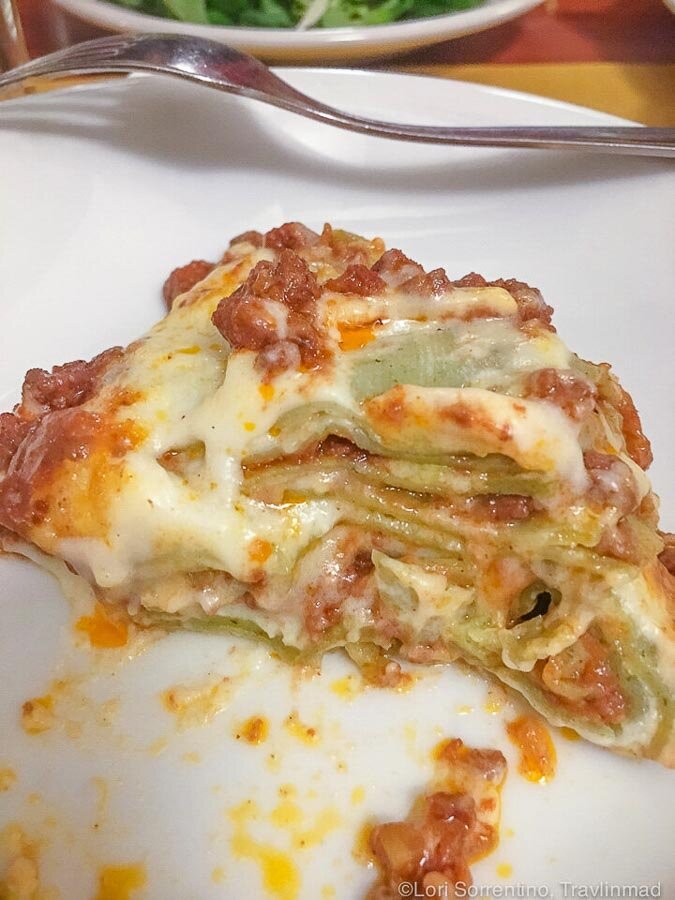 I know what you're thinking — this looks nothing like the lasagna you're used to eating, right? It's not. Since I was a kid, lasagne was my least favorite Italian pasta dish. It was usually dry and unappealing, with thick layers of ricotta and mozzarella cheese covering up any flavor or texture of the noodle. Sorry Mom.

But this? This honors the noodle! I'm not kidding, with one bite I was hooked.

And I found out the secret — béchamel sauce. That's right, no dollops of ricotta cheese straight from the plastic tub. This smooth and flavorful cream sauce is key to typical Bolognese lasagne, traditionally made with spinach noodles. I guarantee you'll fall in love with lasagne.

These small flat round disks are ubiquitous in Emilia Romagna. Simply made from flour and water, tigelle are traditionally cooked in a cast iron mould called a tigelliera, branding them with pretty markings so unique to its look.

They can be found everywhere around Bologna, and are typically served with delicious foods to stuff inside like prosciutto and mortadella.

But tigelle are also tasty on their own, and the more traditional disks are lightly filled with a mixture of herbs, spices, pork, and lard.

A good coffee drink to start your day after a meal just makes sense!

This one is the only coffee drink on the list. But Caffe ‘Allo Zabaione is more than just coffee — it's an indulgent mix of espresso and zabaglione — the egg, sugar, and sweet wine concoction usually reserved for dessert. So why not go all-out Italian and give it a literal shot?

Aroma Cafe's twist on a traditional early morning pick-me-up has been enjoyed here for centuries, so you'll be in very good company! Bonus: Check out Taste Bologna for a great walking tour of historic Bologna that begins the day at Aroma :-).

They’re just off the SW corner of Piazza Maggiore!

Where to Stay in Bologna

If there's one thing to plan on for your first trip to Bologna, it's staying within the city centre, close to the main attractions. This means staying inside the outer highway loop that circles the city. You'll find luxury hotel rooms and quaint B&Bs, all within steps of your favorite piazza. We highly recommend these choices in every budget:

If you're looking for modern elegance, Portici Hotel is a good choice. Located within walking distance to the city center near the University, one of the best parts about staying here are the cooking classes through Bottega Portici!

Check out the latest rates and more details.

The city's only 4-star luxury is at the Hotel Corona d'Oro, super close to the Piazza Maggiore.

Get the latest prices and details.

Check out the latest prices and details.

Simple, elegant, and generally under $100 USD/night, the Art Hotel Orologio is a great value in the heart of the city centre.

Check out the best rates and more details.

The Hotel Metropolitan is a great choice if you love chic elegance in a great location (just a few blocks from Piazza Maggiore), with a beautiful outdoor space.

Check out the latest prices and more details.

What am I missing?

C'mon, you Italophiles and Bologna lovers — what important foods am I missing? Tell me below -- I'm working on my next list of ten! ;-)